The Purpose of Pain - Poem

Cauterize the feeling to stop the bleeding.

They said that killing the pain will lead to healing,

But that simply is not true.

You can’t ask for surgery and avoid the knife.

A numb limb is doomed to be broken

Even still unaware of this token.

To lose the feeling of pain is to lose feeling altogether.

The same nerve that stings captures the softness of feather.

There are itching ears here demanding a scratch,

The birth of a song, it is sweet. It is seduction.

A descant from demon by device of destruction.

Distraction is this salve— impermanent and lethal

Coaxing the mind, undying and deceitful.

Yes, the buzz in the pocket is like that of the bottle,

Except one is regulated, and one runs full throttle.

For you need not be convinced to give your life all to evil.

You only need be pulled away to throw your life in upheaval.

Removal from reality is enough to convince

That peace cannot come from the presence of the Prince.

Instead we buy the lie that leads to death;

Sold a toxin of diversion as addictive as meth

Simply because it kills the pain.

And the alternate reality is a barbed and bloody knife

With a shrouded slash of fraudulent facts.

Because the lie hurts less you can ignore your tracts.

But how long will that last you? How long can you avoid what’s true?

That anesthesia will wear off, or you will be dead and through.

Ruined by your fight to avoid everything that bruises

You may be the one who misses out or loses,

Unknowingly doomed to an eternal fire,

A pain irremovable no matter your desire.

So, what is the value of pain here and now?

Is it not just a portrait of eternity’s brow?

No, the Prince says there is hope in the secondary coming.

This the tune of the church which the saints have been humming.

As they look to that day the pain increases the yearning,

While all creation is groaning and aching and burning

The face of their Savior in the clouds there returning.

The pain also purifies in the heat of its fire

Removing all the dross of erroneous desire.

It floats to the surface unveiling the heart.

Thus refining the faith that doubt may depart.

Purification is preparation for an eternal weight of glory.

The pain it will cleanse and renew your whole story.

The weight of the agony does not compare to the impending.

It’s a momentary affliction juxtaposed to His ascending.

The risen Lord means confidence in the inheritance that is looming

With recreation and beauty by a glassy sea of his grace

At the marriage banquet they will finally get their long awaited embrace.

Without a trace of their sin.

Without a face carrying tears again.

Without a race wearying the years of men.

This is the place of marrying their greatest friend.

So yes, the growing pain is worth the gain through this season.

The stretching soreness is a tool for a reason.

Pain points us to better things and it draws us to a Savior.

The potter has his clay, which he beats down to build up.

Only then can the vase be a living water filled cup.

Pain has a purpose, so in the aches do not wander,

For with Christ in every tribulation we will more than conqueror. 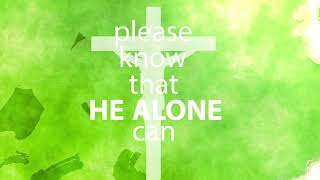 The Appalachian Trail: A Metaphor for the Christian Life - Poem

The Purpose of Pain - Poem

The Costly and Complete Surrender-Poem